Why Join PACCA? It's the power of community

Have you heard the news? The 2020 ECE Summit is going virtual! For more info visit https://earlychildhoodsummit.org

JOIN US: Start Strong PA is a statewide advocacy campaign to increase access to affordable, high-quality child care starting with infants and toddlers.

From a mom on child care providers, “They become a part of your team, helping you raise your child & assisting them in reaching those ever-important milestones ...“

Meet this Year's Award Winners
On October 22, 2019 PACCA presented three awards to individuals who were nominated by their peers as exceptional examples of early childhood educators and administrators.

Meet this Year's Award Winner -- Denise Cressman
At this year's Early Childhood Education Summit on October 16, 2018, for the first time, PACCA presented a combined Award of Excellence and Educator of the Year Award to Denise Cressman. Denise has been in the field for over 30 years and currently operates a STAR 4 family child care home in Danville, PA. Each year PACCA asks its members to nominate their colleagues, those they feel have contributed to the early care and education profession. Denise

Child Care for Working Families Act
In February, PACCA collected 450 individual signers which were added to the names collected by PENNAEYC and PPC. Pennsylvania was well represented on a national petition by 870 total signers urging Congress to support the Child Care for Working Families Act. The petition drive was coordinated by the National Women’s Law Center in DC. PACCA’s name was included in the press release.

CCDBG in the Omnibus Budget Bill
In January, PACCA gathered 175 signatures to a letter in support of increased funding for the Child Care and Development Block grant. Our signatures were added to those collected by PENNAEYC resulting in 220 organizational names sent on a sign-on letter to the Pennsylvania Congressional Delegation.

Thank You Letter to Senator Casey
PACCA joined other members of the Early Learning Pennsylvania Coalition in a letter thanking Senator Casey for his leadership around increased funding for CCDBG.

Did you miss the OCDEL webinar introducing the new Certification Self-Assessment Checklist? The new checklist can help you and your staff prepare for your OCDEL certification rep's visit. The webinar can be view here. https://www.youtube.com/watch?v=3Wn4fB9a7ik&feature=youtu.be.

PACCA Surveys Members on New Fingerprinting Vendor
Are you or your staff having challenges obtaining Pennsylvania's Federal Bureau of Investigation (FBI) fingerprinting since Pennsylvania engaged a new vendor IDEMIA? We want to hear from you https://www.memberleap.com/members/form.php?orgcode=PCCA&fid=2495003.

PACCA Elects New Board Members
Beginning in January, the PACCA Board of Directors will welcome three new members. Thank you to all members who voted in this year’s elections for the open At-Large Position to the PACCA Board. Filling that position will be Christy Renjilian, Executive Director of Child Care Consultants in York. Child Care Consultants is the Mid State Regional Key, the CCIS of York County, a CACFP sponsor and United Way of York County partner agency. Christy has nearly 30 years of experience working with early childhood education programs.

Also joining the PACCA Board is Damaris Alvarado , owner and the Executive Director of two high-quality STAR 3 & 4 centers, the Children’s Playhouse Early Learning Centers and Cookie’s Day Care Center in Philadelphia. She is a partner with the Philadelphia School District as a Head Start and Pre-K Counts provider. She is also a recipient of the Mayor’s Office of Education PHLpreK program.

Another new Board member is Aliya Johnson-Roberts , Executive Director of Pratt Street Learning Center in Philadelphia. In partnership with her mother, they opened Pratt Street Learning Center in 2008. She has put all her efforts into building a program that caters to children and their families in the community. She has been a member of PACCA since 2010.

We hope members will join us in welcoming our new members to the PACCA Board of Directors.

Meet this Year's Award Winners
Each year PACCA asks its members to nominate their colleagues, those they feel have contributed to the early care and education profession. We received 23 nominations for the two awards this year all demonstrating extraordinary talents, gifts and commitment to the field. Awards were presented at the Early Childhood Summit on October 17, 2017. 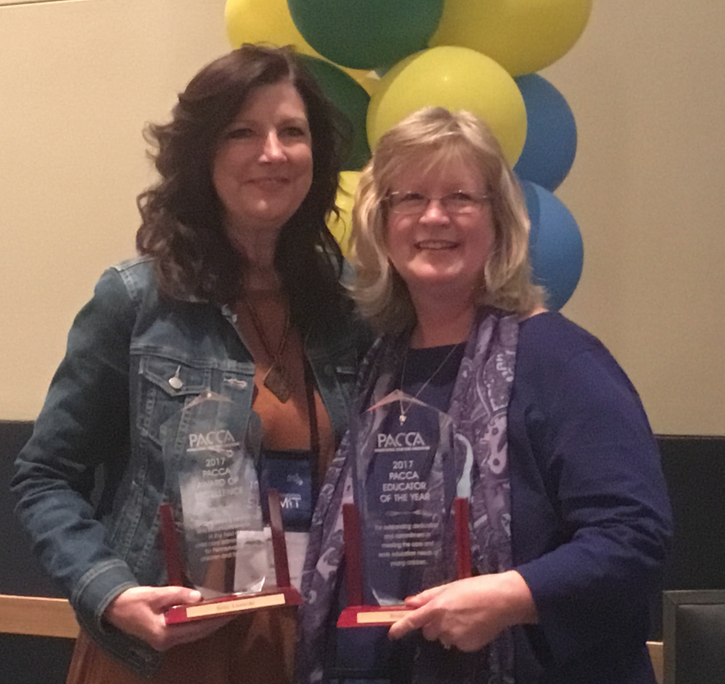 The Award of Excellence honors the director or administrator for outstanding service and accomplishments in management of a program. This year’s award was presented to Betty Lisowski (photo right, left) who has been working in the field of early childhood education for over 36 years, and for the past 20 years as the Director of the non-profit Riverview Children’s Center in Verona, PA.  The center has maintained NAEYC accreditation continuously since 1987, and has earned and maintained a STAR 4 designation in Keystone STARS.  They have also been a PA Pre-K Counts provider for 10 years. PACCA received 17 letters of support. There were so many letters, in fact, that we decided that the best way to find out the top themes was to use a word cloud – the words used most frequently by the letter-writers were “Children,” “Staff,” and “Always.”

Because of our outstanding nominations this year, the committee selected two nominees to receive the Educator of the Year award. Moving forward, PACCA will be annually recognizing both a home-based educator and center-based educator. The Educator of the Year honors an individual for their outstanding service and accomplishments in the classroom.  Selecting an individual to represent the best in these categories is a challenging task because so many are deserving of recognition. 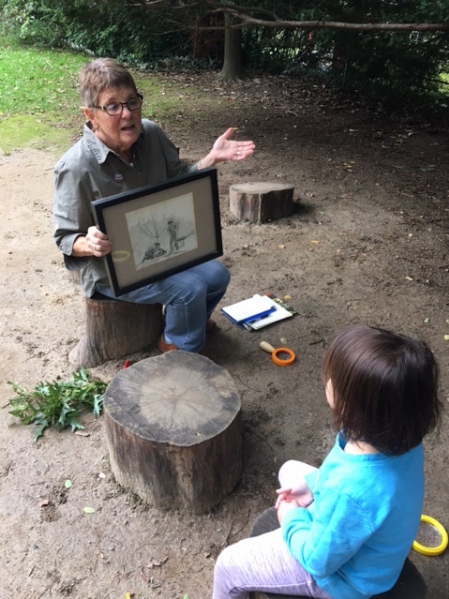 The Educator of the Year award was presented to Bridget Heinl (photo above, right) of Bridget Heinl Family Child Care Home in Hershey. She has more than 31 years of experience in the early care and education field. She has worked at a before & after school program, a nursery school, child care centers, and has operated family child care homes in two different communities in Central Pennsylvania. Her program is accredited by NAFCC (National Association for Family Child Care) and has been designated STAR 4 in Keystone STARS. The nomination and support letter-writers emphasized her dedication, her warmth, and her support of other early care providers.

PACCA acknowledges and applauds the tremendous work that all the award winners and the nominees have accomplished.

T.E.A.C.H. Pennsylvania Mentioned in Article in The Atlantic

T.E.A.C.H. Pennsylvania was mentioned in an October 26, 2017 article in The Atlantic . The article “The Crisis Facing America’s Preschool Teachers” discusses how efforts to fill centers with better qualified early-childhood workers are threatening the jobs of those who can’t afford to get their college degree and how some states are turning to apprenticeships to solve both problems at once. The article highlights the Philadelphia Apprenticeship program. https://www.theatlantic.com/education/archive/2017/10/the-crisis-facing-americas-preschool-teachers/544002/

Childcare in the age of social media: What to know about regulations and Craigslist ads
PACCA Executive Director, Diane Barber talks to CBS21 about finding and selecting child care. View the clip HERE.

Conversations with OCDEL Certification Continue
On July 26th, PACCA and other child care advocates met again with members of the OCDEL leadership team and Certification staff to discuss ways to increase communication and transparency between Certification and providers. Customer service surveys currently being used in Colorado, Georgia, and Wisconsin were reviewed.  A Pennsylvania customer service survey was discussed and drafted that would be sent randomly to providers following visits by Certification Representatives. Additionally, the group reviewed a certification compliance checklist, a document that parallels the template used by Certification Representatives during their visits, that would be a tool for programs to assess their readiness and compliance to regulations. The group will review again at its next meeting. PACCA proposed that OCDEL develop a manual outlining the appeal process for citations, issuance of provisional certification, etc. at its next meeting.

OCDEL has partnered with the Department of Revenue to ensure tax obligation compliance for Keystone STARS entities and providers since 2008. Although this is not a new process, recent changes from a manual process to an automated and proactive compliance check has increased efficiency and outreach. In the last year, the Revenue Department reviewed information on 2,400 providers participating in Keystone STARS and receiving funding or awards. This review was to ensure that they were compliant with reporting and remitting business taxes. Revenue found nearly 750 were potentially non-compliant. Upon their review, over 220 were found compliant; however over 500 cases are not resolved. The intent of the review is to prevent tax non-compliance issues from becoming tax liens/liabilities. Keystone STARS providers with outstanding liens/liabilities are suspended. 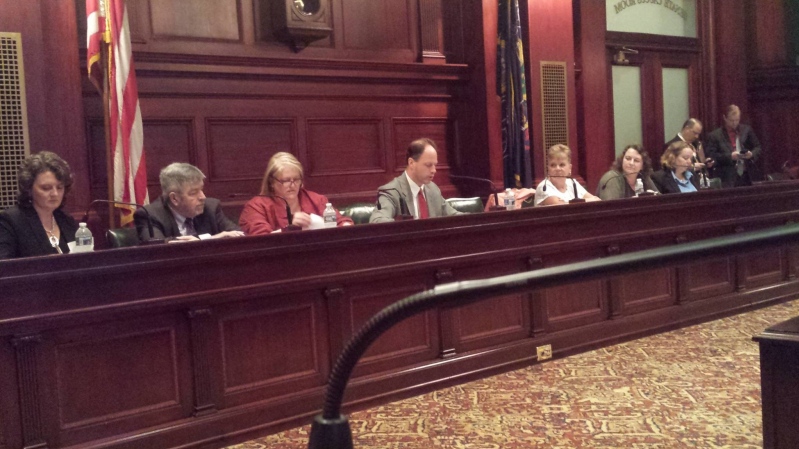 OCDEL and Advocates Talk Certification Concerns
OCDEL met with PACCA and other child care advocates on April 18, 2017, to begin an ongoing conversation aimed at supporting solution-based communication and feedback between providers, stakeholders, and Certification staff. The group exchanged strategies for changes to system practices and opportunities for improvement, especially around the uniform and consistent application of certification regulations. While individual situations between providers and Certification were not discussed, the dialogue did explore ways to support better understanding of the laws and regulations, as well as possibilities and limitations for system change. The conversation was facilitated by Laura Johns and Christopher Sleeme, Propulsion Squared, who have been working with OCDEL and stakeholders on PA’s STARS Revisioning efforts.

PACCA Responds to House Budget Cut to Child Care
PACCA asks ... If they're really pro-family, lawmakers should restore this harmful child care cut
In an Op Ed in the 4/5/2017 issue of the Patriot News, Diane P. Barber, Executive Director, PACCA addressed the proposed $28 million budget cut made in HB 218, the House budget proposal for FY 17-18. The House budget would cut existing levels of child care funding. OCDEL projects the waiting list would increase to 25,000 children by the end of September 2017 with the average wait rising to nearly one year. As Barber asks in her Op Ed, "Why is it so hard to convince policymakers and others to invest in child care? High-quality child care is where early learning takes place. We have to overcome this “blind spot” that helping families work and care for their children is somehow feeding into an increased reliance on government." Read more at http://bit.ly/2pQzkqX

Support for parents seeking child care | 2/24/2017 | http://bit.ly/2mFD4JB
In an article appearing in the February 24, 2017 edition of the York Dispatch, Diane Barber, Executive Director of the Pennsylvania Child Care Association, was quoted: "the availability, or lack thereof, of affordable high-quality child care in the state will have economic consequences now and in the future. Child-care providers allow today's parents to continue working and providing for their families, but high-quality child care can give today's children a better chance in "tomorrow's workforce." "If we want to build our economy, we need workers," Barber said. "We need today's workforce, and we need tomorrow's workforce."